Dr. Bryan Ardis, D.C. is the CEO of ArdisLabs and is committed to healing acne from the inside out! 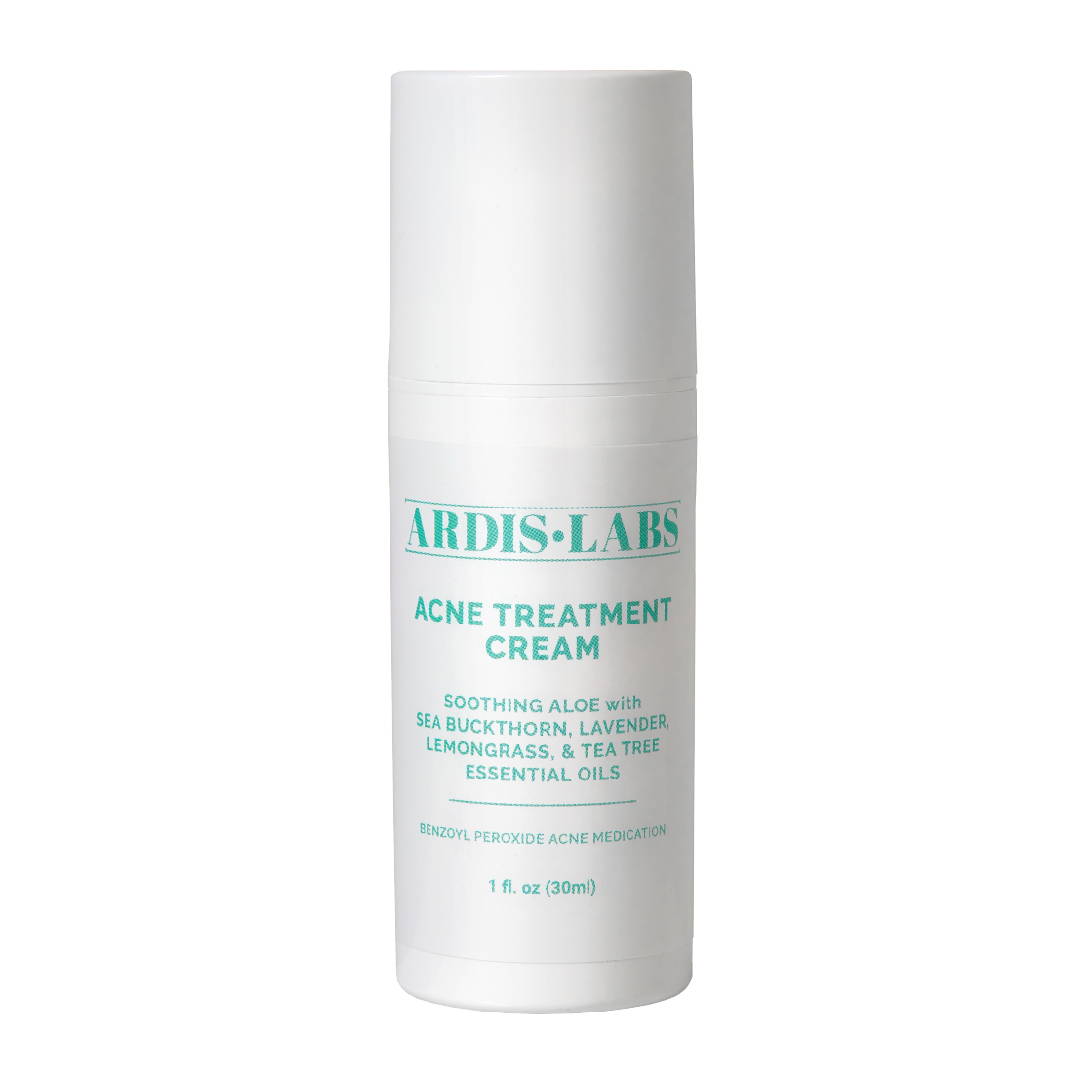 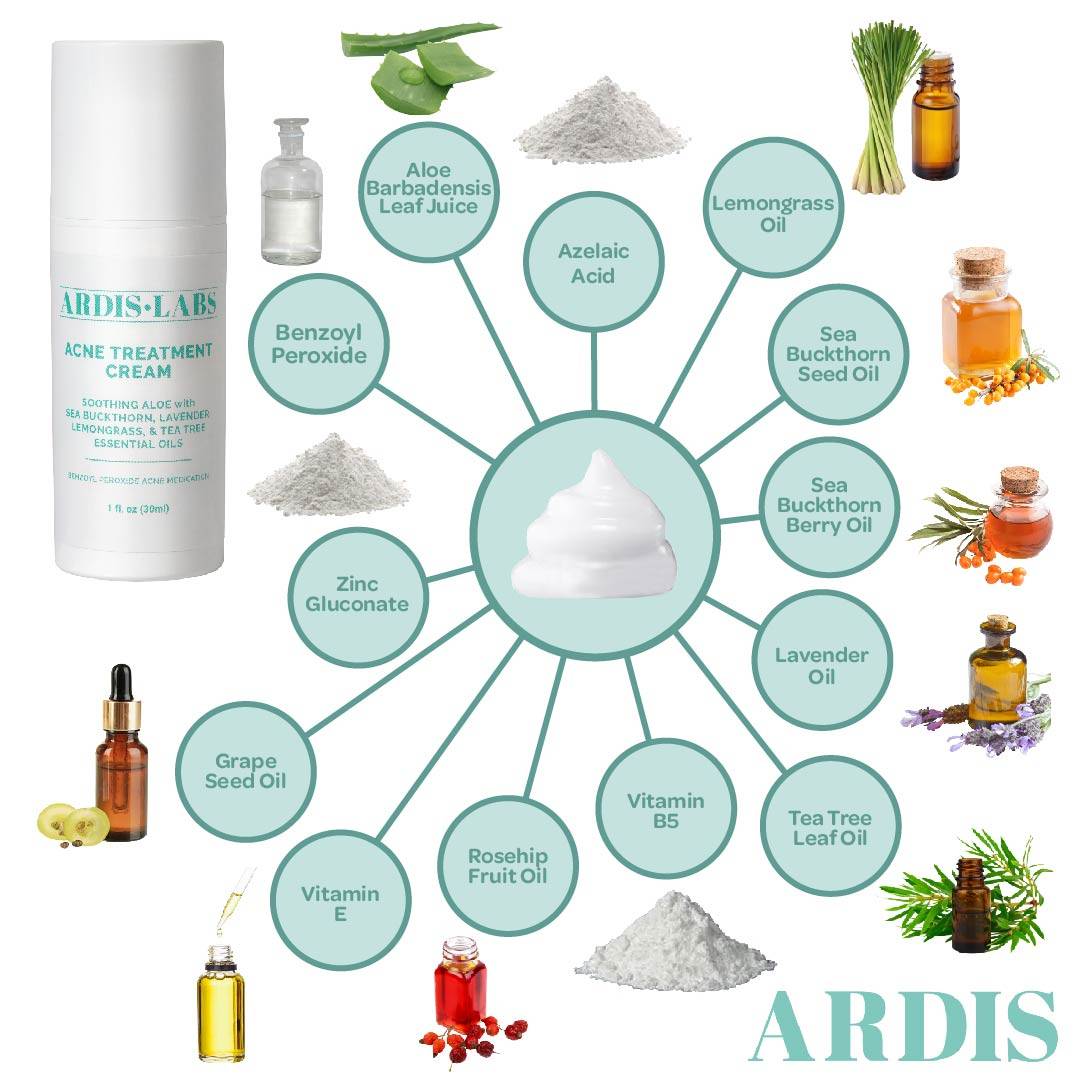 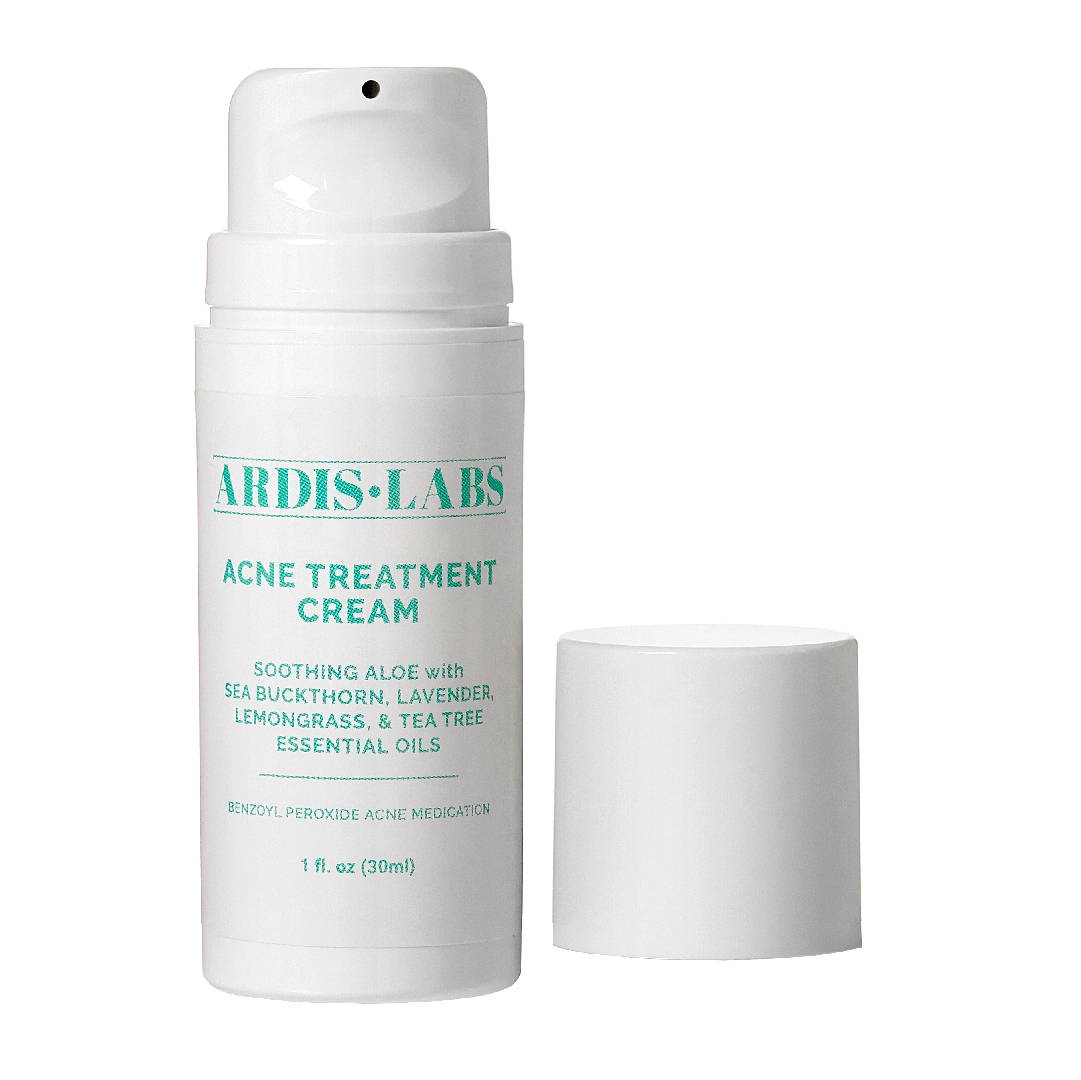 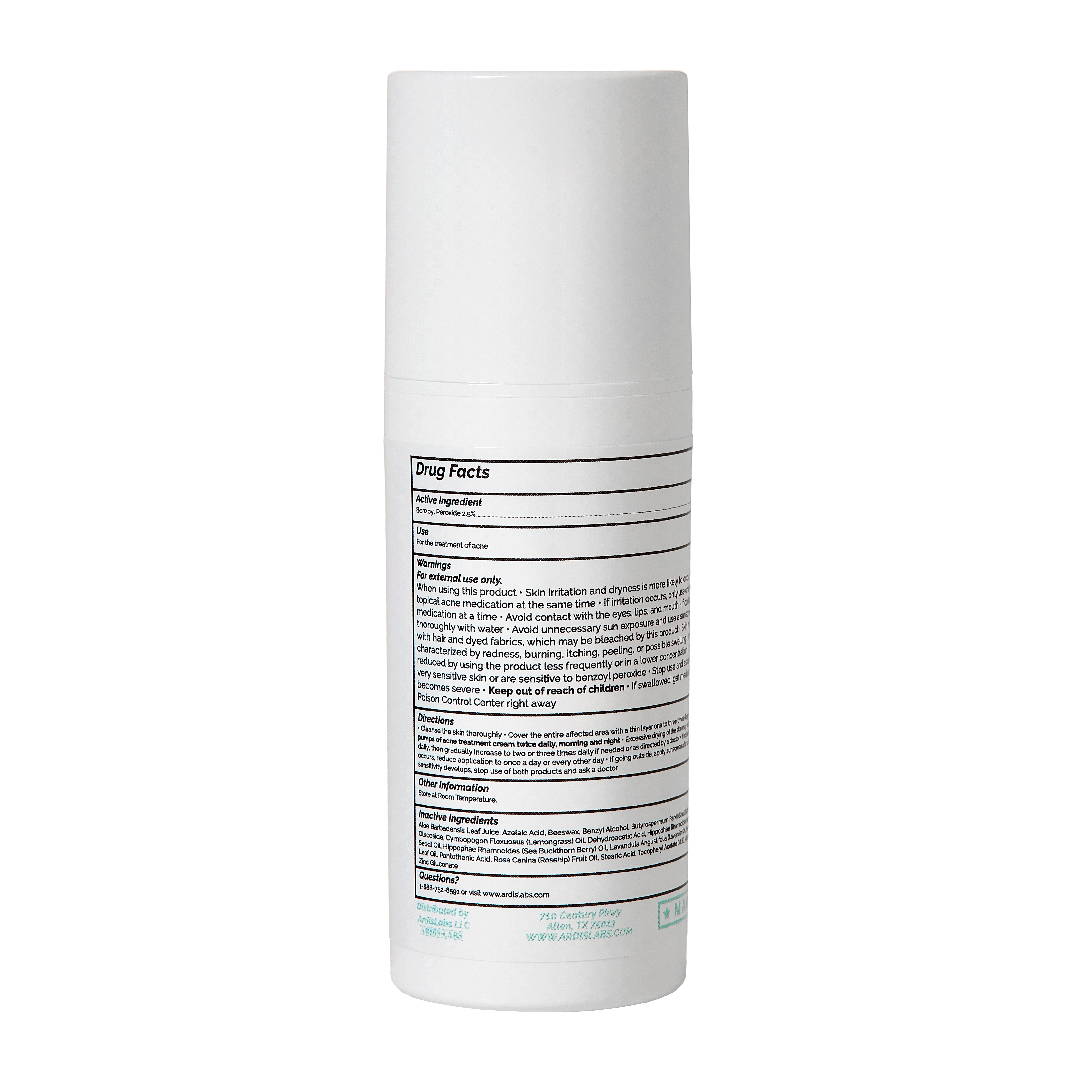 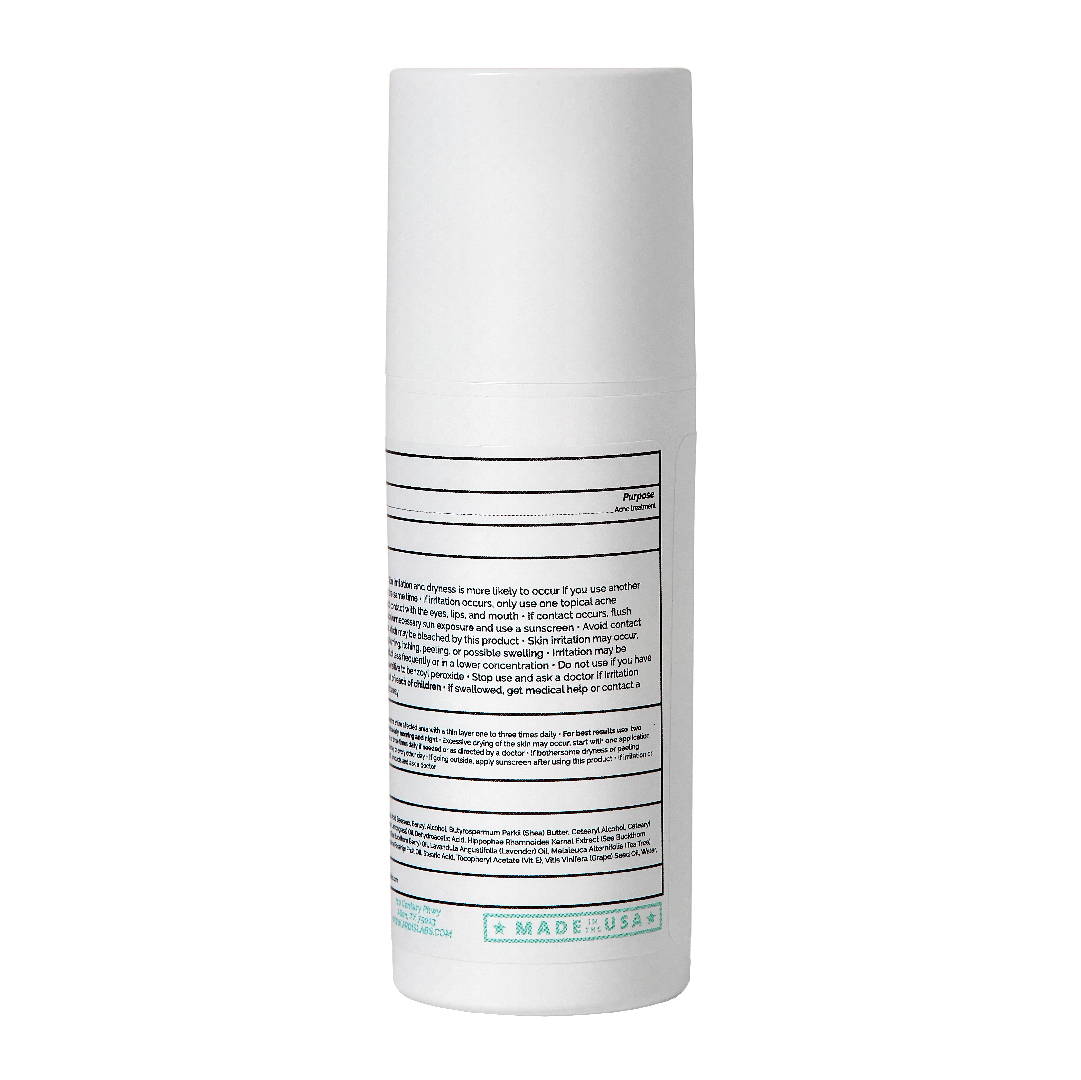 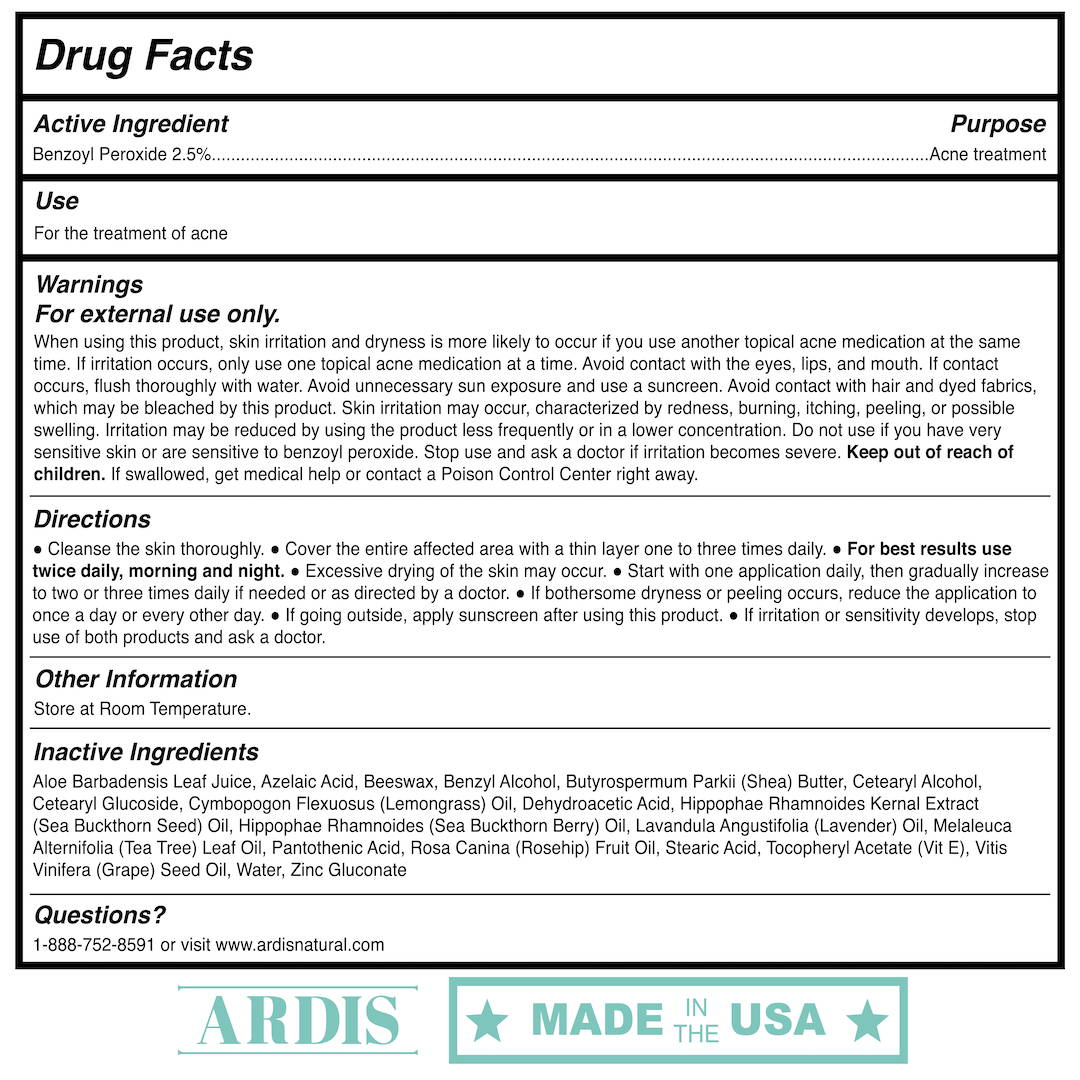 Sold out
After cleaning your skin with Ardis Acne Cleanser, it’s time to bring in the big guns. Introducing the most powerful OTC Acne Treatment Cream ever created: The Ardis Acne Treatment Cream!
Combines the most effective dosage of Benzoyl Peroxide acne medication with a myriad of incredible natural skin boosting ingredients. It’s time to introduce you to the hardest-hitting, most powerful, all-star ingredients, that will bring you and your loved ones acne clearing results, guaranteed.
Guaranteed results in 30-days or your money back!

Ardis Treatment Cream – clears skin from acne and other skin blemishes as well. Apply after using the Skin Cleanser.

How to Use: Apply two pumps of Ardis Acne Treatment Cream to clean skin once in the morning and once at night.

LEARN ABOUT OUR INGREDIENTS

Contains vitamin A, C, antioxidants, and enzymes that are highly anti-inflammatory, and benefits burns, dry skin, and acne

Naturally found inside grains such as Barley, Wheat and Rye Azelaic Acid has several studies confirming its efficacy in helping reduce acne lesion formation in the skin.

The results of two double-blind clinical studies found that a 15% Azelaic Acid topical solution was as effective as Benzoyl Peroxide and Clindamycin (acne prescribed antibiotic) in treating Acne Vulgaris. (24)

A study on Lemongrass Oil in 2018, found that Lemongrass and Tea Tree Oil when combined had Antibacterial activity against both Propionibacterium Acnes bacteria (acne causing bacteria), and not only that it had antibacterial activity against S. Epidermidis bacteria also, which can lead to serious health conditions such as septicemia and endocarditis. (4)

Rich in antioxidants that protect the body against cancers, diabetes, heart disease, and aging.

In the same study above, the researchers concluded that Sea Buckthorn Oil showed a pronounced decrease in sebum secretion of the skin, proving the anti-acne benefits of Sea Buckthorn Oil. (12)

Lavender Oil has many proven skin benefits such as:

Antioxidants that help reduce the appearance of Wrinkles

Proven to speed up healing of sunburns and wounds

In 2013, an acne study was published, and concluded that Lavender Oil combined with Tea Tree Oil resulted in Antimicrobial (antibacterial) activity, and reduced the number of acne lesions. (3)

Lavender Oil has been proven to speed the healing of skin tissue, and proven to increase the speed that our skin replaces collagen, to reduce scarring. (51)

For centuries the Aboriginal people of Australia have benefited from oils found in the leaves of the small native tree called Melaleuca alternifolia. It is now recognized around the world to be one of the most powerful healing plant oils on earth. Just a humble few of the benefits provided by this incredible oil include:

In 2013, an acne study was published, and concluded that Lavender Oil combined with Tea Tree Oil resulted in Antimicrobial activity (acne bacteria killing power), and Lavender and Tea Tree Oil reduced the number of acne lesions. (3)

In 2015, a researcher from the School of Pathology and Laboratory Medicine at The University of Western Australia, reviewed research studies performed on Tea Tree Oil from around the world. He concluded that Tea Tree Oil has been proven effective against acne and discussed how Tea Tree Oils Mode of Action in the skin to promote skin healing and its antibacterial properties. (8)

In 2018, Tea Tree Oil was combined with Aloe Vera applied topically and it was shown to be more effective and powerful against acne than the compared acne medicated (erythromycin) cream. (1)

Tea Tree Oil and Lavender Oil when combined and applied topically to acne sufferers, were proven effective at killing acne bacteria and reducing acne lesions in a remarkable study published in 2013. (3)

Moisturizes and heals the skin

2014 Study found that acne sufferers, when supplemented with Vitamin B5, B5 supplementation reduced acne lesions. (22)

Study conducted over 30 years ago, shows that people were more prone to having acne if they had LOW amounts of both Linoleic Acid and Omega 6 Fatty-acids. (13) Rosehip Oil has high amounts of both.

Linoleic Acid (which is high in Rosehip Oil) was found effective at both healing scarring and reversing hyperpigmentation of the skin, in an awesome study concluded in 1998. (14)

When it comes to the health of our skin, there is one Vitamin that has more attention and research-proven benefits than all others minerals or vitamins on earth, and that is Vitamin E.

It helps prevent signs of aging

Helps to reduce the appearance of scars

It was determined in a study of acne sufferers, that when lower levels of Vitamin E, Vitamin A, and Zinc found in the blood, there was a direct correlation to the severity of acne lesions among acne sufferers. (19)

In 2017, an acne study found that Vitamin E and Zinc supplemented, showed significant improvements in both mild and moderate Acne Vulgaris. (17)

In the Journal of Plastic, Reconstructive & Aesthetic Surgery, Volume 63. Researchers found that Vit E had proven ability, even after surgery, to prevent and help heal scarring of the skin after incisions. (18)

Reduces skin’s absorption of UV rays from the sun

Grapeseed has powerful antimicrobial activity, and in this study from 2016 proves just how powerful Grapeseed Oil is against various microbes. (15)

2016 Grapeseed Oil is shown to speed of skin cell regeneration, and potential for healing scars. (16)

Reduces how much oil the skin produces

Study confirms, acne sufferers have less Zinc in their body. In fact, the levels of Zinc and Vitamin E were found to be significantly lower compared to non-acne sufferers. (19)

Multicenter study concludes that zinc gluconate was effective in the treatment of inflammatory acne. (48)

In a fourth study, 75% of the acne patients taking Zinc, saw improvements in 2 months. (50)

Your cart is currently empty.
Click here to continue shopping.
Search
Account
Thanks for contacting us! We'll get back to you shortly. Thanks for subscribing